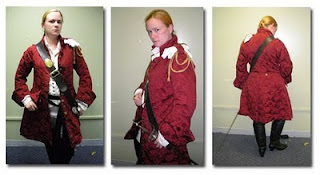 Adapted from the Simplicity Totally Not Jack Sparrow pattern, this coat is a blending of 17th century, 18th century and Napoleonic awesome for a privateer captain with an over-developed sense of justice. It's nowhere near historically accurate, but for a game that involves, pirates, napoleon, king arthur and baba yaga, I think I'll be OK blurring the lines a bit.

The waistcoat is an adaptation of JP Ryan's 18th century waistcoat. It has 18 tiny buttons, working pockets and fitted lines. It's made of heavy weight linen, and I have found after several plain white linen 18th century military waistcoats for reenacting, top stitching on all the edges goes a long way to reinforcing the structural integrity of such a flimsy fabric.
Posted by Sarah M at 8:15 PM