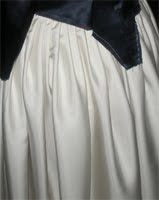 For 7th Sea, but sort of for reenacting, I started a navy blue silk charmeuse robe a l'anglaise with a cream silk twill stomacher and petticoat. The cream silk twill is understated elegance incarnate. It is this gorgeous grayish pearly cream color that looks like it's softly glowing. The charmeuse is really floaty and moves very dramatically. I got a sweet deal on it on ebay from a seller named "happygoodbuy". 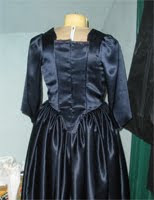 The gown is a full 3 yards, and the petticoat too. I was going for something vaguely reminiscent of an 18th century navy uniform. I was also giving thought to attaching epaulets so I can wear all of my naval bling with it.

Update: 11:35 pm - I dragged out the mock up and cut facings around the neckline so the white from the cotton lining would not show. The was not difficult, but tedious none the less. I re-cut the angle on the front, and with any luck, the stomacher will fit in as it should. I got 15 little pearly buttons. 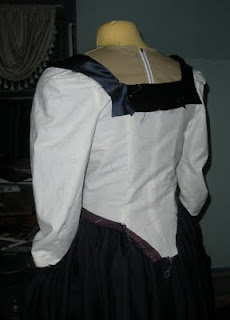 ictorian asthetic, but I think it will work. Inside out it has an unfortunate resemblance to a sailor suit, but having the facings there (right side out) will enable me to keep the dress free of trim. Without the facings, I would likely have used ruching to hide the white poking out from the lining. The character I intend to use the dress for is not exactly the frills and lace type, so the simpler the better.

I actually added sleeve flounced, but I may take them off again. They kind of spoil the whole simplistic understated elegance thing I had going on.

Update 10:33 am Sunday - Trimmed blue gown and hemmed it. Next up is fussy finishing work, and ripping my way through thirteen buttonholes. I want to drive through this project quickly because I have three more to get done before the second week of may! I have my 1812 Sari Ballgown, my mom's sage/olive green silk charmeuse 1812 ballgown and a commission for the museum. Busy busy!
Posted by Sarah M at 10:21 AM No comments: