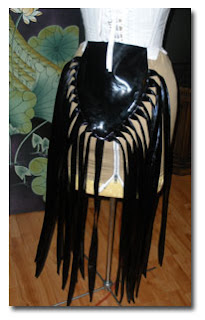 Nasty weather and staying in unexpectedly on a Saturday night, I started makin' stuff. I have a fabulous skirt that just needs a little extra something. I got the idea to make an ornament similar to the tentacle tail on the emerald green taffeta 1870s-inspired gown for New Orleans this year, but the thought of turning all of those tiny little tubes inside out and stuffing them with polyfill was in no way appealing. I opted instead to make flat sea snake-like tentacles about one inch wide on an identical base.

I must have watched 5 or 6 episodes of Star Trek: Enterprise while flipping tentacles and stitching them down. (Yes, I am a giant nerd.) Now I need to flip and top-stitch about 10-12 more tentacles for the top layer, and make a wasitband. I think this makes a fine alternative to other more cape-like ideas I had to provide some drape and drama to this costume.

Update 3:50 PM: Just a few photos of my tentacle process and some shots of the (mostly) finished product. Very H.R. Giger.