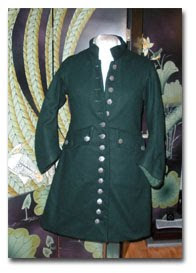 Conceived as a novelty from the leftovers of AS's coat, I combined the neckline of the JP Ryan waistcoat, the box pleats of the JP Ryan frock coat, and the general shape of the simplicity pattern. I removed the godets the Simplicity pattern calls for - the fullness is more reminiscent of the 17th century - and added a rather 19th century looking standing collar.

I think the collar could have used something to stiffen it - or maybe I'll remove it. It's itchy and in an awkward place, but it looks somewhat unfinished without it. Also, the cotton lining does not slide the way I would like, and clothes worn under the coat bunch up in terrible ways. I suppose it's a work in progress. I intended to wear it as an every-day outer garment, but the buttons and general anachronistic feel make me a bit apprehensive about wearing it in public as clothing and not some theatrical costume.
Posted by arachne at 9:33 PM