Pre-Op
A few months back, I had attempted to shave down the foam to a better shape. It took me a while to develop a workable slice and shave technique with the razor, but eventually I got it. The breasts, aside from being far too large were situated too low on the torso. The rear end was also a bit too low. I think I had the right idea with my series of amputations, but I did not go far enough.

Post-Op
I took the breasts completely off and went to town on the waistline and back. It looks a bit like an apple someone has been eating.

Polyfill Stuffing
I used polyfill to stuff the areas that needed stuffing. Hopefully the decreased density will make it possible to strap a corset on the dummy now. 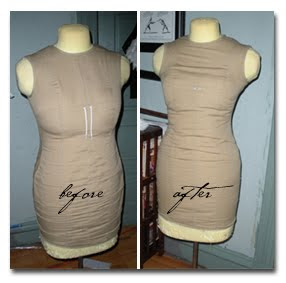