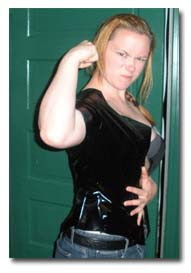 Sewing the vinyl went a bit easier than I thought until I came to the sleeves. That was approximately as difficult as I thought it would be. I got through one before I started giving serious thought to sewing the second one in completely by hand. No sooner did I got both in place then I realized they were ever so slightly too tight. I'm going to stretch them a bit and see what that does, as it's a mere fraction of a inch. I really don't want to re-cut them. I also don't want the ugly sausage effect on my arms.
Posted by Sarah M at 11:22 PM