June 29, 2010: After much hand sewing, we had a functional pair of front and back lacing stays suitable for the 17th and 18th centuries. Now with the major underpinnings finished, starting on fitting the jacket could begin. I started with a mock up cut from the Reconstructing History English Civil War pattern. A few minor tweaks later, I was ready to cut into the linen. The lady chose a vibrant mustard yellow for the jacket.

The stays are pretty straight up. I used cable ties for the bones, and strips of the same un-dyed linen for binding. With the straps, it gives a lot of support but does not really restrict movement. Now I just need to replace the somewhat less-than-period cord with some linen tape. 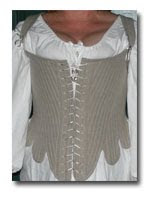