White: Believe it or not, the (distant) second most common color for silk bonnets after black in the period including, and surrounding the American War for Independence (Revolutionary War).

Examining Don Hagist's Wives, Slaves, and Servant Girls, I took a tally. I counted, the word "bonnet" mentioned 100 times int he advertisements. The number made calculating percentages rather simple. Out of those 100 bonnets, 69 were black. Eight more were black with colored linings - white, blue, or red. 77% of the bonnets described in the book were black. The next most common color was white with 12, followed by green with 5, and blue with 4.


The book is a collection of runaway ads from American newspapers from the Revolutionary war years, and is very helpful in determining accurate working class portrayals for the period. It is especially helpful, since a great deal of period imagery of women from the years between 1770 and 1783 come from England, and frequently depict upper class women.

Several of the white articles of headwear were called "bonnets" but were described as being made of linen, or cotton, making me wonder if they are what reenactors now call "caps", or if they were brimmed bonnets. Insight on this is appreciated, if you have any.

In any event, I hope my research is useful to someone. 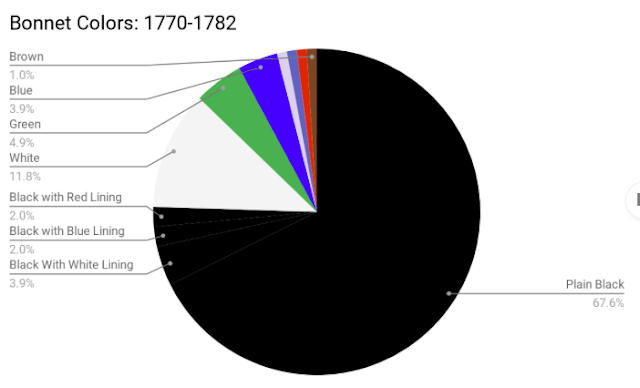 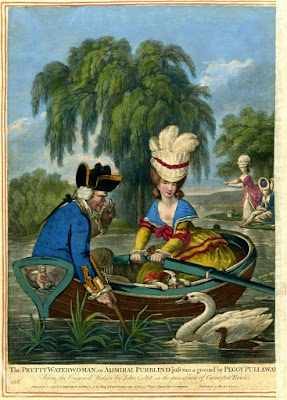 1771: Runaway advertisement from the NY Gazette: 26 year old Mary Gordon AKA Mary Dill who was described as “ pale fac’d, down look, takes snuff and much addicted to drink, and a great lyar,”  wore a “white bonnet” (Hagist, 17)

1774: A Runaway advertisement from the VA Gazette.  A “well set Mulatto woman Slave named Bess had among her possessions a “white cotton shift and bonnet” (Hagist, 56)

1775: Runaway ad Mary Patterson in the Pennsylvania Gazette.  “She had on, and took with her, an old white bonnet…” (Hagist, 78)