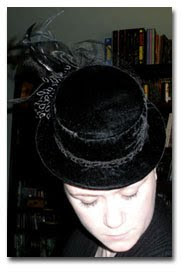 Like most of the fabric covered hats I make, this one was entirely un-planned. I bought the straw frame at a Bakers shoe store, and went to town on it with pieces of an old velvet skirt I inherited. What follows is an explaination of process without the benefit of official millnery terminology.

I cut out two ovals with pinking shears following the general shape of the brim and crown. I left some extra space to cover over the top and bottom of the brim and so the crown pieces would hang down a bit. I then cut a strip to go around the band.

The piece around the brim has a hole cut in the center. Through this hole, I slipped the hat. You might be able to make out the little triangles I cut out of it around where the fabric touches the actual straw. This has the effect of making the fabric lay straight on the frame.

Next, I attached the brim cover with a simple straight stitch around it's edge. I then gathered the rest of the fabric draw string style, and tacked it down on the inside, sewing along where the crown attaches to the brim. The crown cover was relatively simple to attach.

Next the band went on, hiding the ragged edges of the crown and brim covers. This was a little awkward, as I used an invisible stitch, which I'm sure has a very descriptive and practical name. I tried to capture it in the picture in thumb #6. I left the inside un-finished, and attached a plastic comb that came with the hat from Bakers. A few pieces of Black Lady Church Hat trimmings later, and we were in business.

Click on the thumbnails to see larger images - as always.

I, and a few of my sisteren have been commissioned with the task of filling the Honor and Steel costume box with as many kimono/haori etc as we can. Somewhere on the order of 115 yards of cotton in different colors has been purchased, and the first few have made it to game. Last night during the snowstorm, I threw together a full length kimono in deep blue. Enlisting the help of DN, I painted the mon of the Crane clan on the back. One down, a bajillion to go.
Posted by arachne at 9:57 AM No comments:

January 2010: Update - The flat skirt hooks on the front closure just never worked. They're not even remotely period correct, they pull in terrible looking directions, and they're a pain to do up. I lost patience with them, and installed metal eyelets, and now the entire garnment just looks better. I saw something similar in an extant piece in the collection of the Mark Twain House and the V&A Museum online.

Posted by arachne at 5:15 PM No comments:

Pattern: ?? - but inspired by the Alfred Angelo bridesmaid dress I wore to a friend's wedding as well as a drawing on page 192 of JoAnne Ollan's Victorian and Edwardian Fashions from La Mode Illustree - . "Ball toilette" - White charmeuse with green pailletted braid. Surplice bodice; the front is decorated with small rounded corselet of emerald silk. The sleeves are edged with beaded fringe.

I intend to make something similar someday. Now ask me for what.