I'm working on a research project at the museum for a potential lecture on popular misconceptions regarding corsetry in the late 19th century. It feels good to be back in the library. I have a trip to the old alma mater to do some more serious academic research in the near future.

You know the heroine in every adventure movie that takes place in the past ever? The one who 'can't breathe' when she's laced into a corset? She is lame. I have always thought such scenes were cheap ploys aimed at modern audiences designed to get them to sympathize with her and view her as "fiesty" and dynamic.

Was the corset in the Vicorian era in particular a tool for social control? Or was it just underwear? I plan to examine how it is used in popular imagery in our own time, and how it would have been viewed by everyday folks in the 19th century in addition to the criticism laid down by physicians and feminists alike.

It seems everyone has an agenda where the corset is involved. Let's see if we can find the truth somewhere in the middle.
Posted by Sarah M at 12:33 PM No comments: 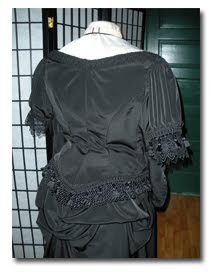 I added ruched self-trim to the neckline as well as bullion fringe and tassel trim to the bottom back edge. Some tassel trim around the already lace-edged sleeves makes it even more dramatic than it was before. Next up, buttons and hooks and eyes for the front.
Posted by Sarah M at 5:31 PM 2 comments:

The result of near constant daydreaming 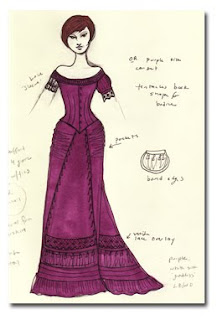 I had a sample of the most beautiful deep eggplant purple silk taffeta from Renaissance Fabrics. I have also been inspired by SG's recent foray into Victorian natural form. I have decided that I want to do a natural form ensemble for New Orleans this September. It packs up smaller for air travel than late bustle, as much as I love my lobster tail cage bustle. After much doodling and near constant daydreaming on the subject, I have decided to move forward with it.

Several rows of texturally interesting self trim, beaded tassel braid from the home dec section of the fabric store, and possibly some black venise lace, I intend to dazzle with this project. It also has the added bonus of not requiring a new corset or new underpinnings.
Posted by Sarah M at 3:30 PM No comments: 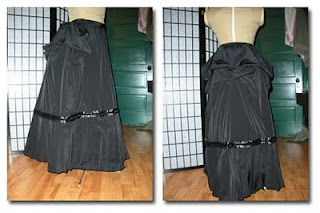 More snow, more snow and more snow resulted in this 4 gore 1880s underskirt with three layers of trim. I plan on making a matching overskirt and ballgown bodice for Baltimore this April.
Posted by Sarah M at 7:58 PM 2 comments: